This page details events which I found notable to the treatment of my Diabetes...

1995 - Diagnosed as Type 1 Diabetic - Obviously this diagnoses was a shock, I was a child so I really didn't know what it meant and at the time, I wondered what all the fuss was about. I remember thinking I feel fine, yet I'm in hospital. I remember also thinking why are the nurses stabbing me with this very painful needle many times a day and doing blood tests. When I say needle, it was literally a needle which was manually stabbed in my finger, it must have been quite a thick or blunt needle, I thought surely there is a better way than this! Fortunately the next day a nurse who specialised in diabetes had a device, to my relief, which was a lot less painful for doing blood tests.

I was diagnosed on a Friday afternoon, unfortunately this meant the usual Monday to Friday staff who specialise in diabetes, were not there. However once I started receiving treatment I began realising how unwell I had been feeling. The tiredness, the constant thirsty feeling, even though I had been drinking loads.

If I remember correctly, I was initially on 2 injections a day with a mixture of long acting insulin and short acting insulin, in syringes. I stayed in hospital for around 2 weeks, I remember being "let out" during this time, once, to go home for the afternoon. Unfortunately, even though I was pleased to get home, after a couple of hours I was very ill and had to rush back to hospital. I can only imagine what my parents were thinking!

You have to keep in mind that the nurses and doctors didn't know as much as they do now with regards to the best way to treat diabetes, they were trying very hard with my care with what they knew. I will always be grateful to them for the care I received and continued to receive.

Over the next 10 years I would continue to learn strategies to help with controlling the diabetes. I remember at some point, I think a year or two after diagnoses, I was given the option to take the insulin in pen form, instead of having to draw up the insulin each time I would be able to have the insulin in a cartridge, in a device that looked like a pen. This was a big time saver as well as making it easier. At my scheduled meetings at the hospital, which was around every 6 months or so, I would be given a set insulin dose to keep to. I would maybe change the set dose by a couple of units depending on a blood test reading, but there wasn't any matching of carbohydrates to insulin dosage and so the control of the blood sugar levels wasn't as good as it is now.

I tried out many products for measuring blood sugar levels, including a GlucoWatch which was non invasive that used a low electric current to somehow measure the blood sugar levels. This was very promising at the time, however it had a few issues. Every 10 minutes or so I could feel an irritation on my arm, which presumably was the electrical current! Also if you got too hot it didn't like that, it would error out. Having said this, it did work and at the time it was something which I was very interested in, not only from a diabetes management prospective. I'm into technology and new and exciting products, so this was certainly fascinating to me.

Another notable device, which I have forgotten the name of, but lets call it the vacuum! Basically it was an automated hand-held device that you placed on your arm and it applied a vacuum. I found the sound to be a little worrying! It then lanced the skin and transferred blood onto the test strip. Now this in practice was all very well and good however getting the device setup was a risky business. Firstly one had to avoid getting stabbed when inserting the lancet into the device, also once the blood test had been done, inside the machine had to be cleaned! Not very practical but nevertheless I was pleased to see new devices coming to the market.

I tried out a number of blood test meters. I remember being impressed with the OneTouch UltraSmart meter which produced a graph. In terms of lancing devices, the Roche (Accu-Chek) Multiclix lancing device I have always been impressed with, not sure when this came out. I have always used this since, as it holds 6 needles at a time with very little risk of one accidentally injuring oneself.

2005 - Carbohydrate Counting - I transferred all medical care down to Bournemouth due to going to Bournemouth University. During this time I met the excellent Diabetes team down here at Bournemouth Hospital and the consultant at the time offered me a course they do called BERTIE which basically taught me how to match carbohydrates to insulin dosages and how other factors affect blood sugar levels. This changed my life, the system worked and I was able to manage the blood sugar levels much more easily once I got the hang of counting carbs.

October 2006 - Insulin Pump (Accu-Chek Spirit) - I was fortunate to be offered an insulin pump. Even though I was on four injections a day prior to going on to the insulin pump, the blood sugar levels were still difficult to control. The benefits of being able to administer a dose and control the background / basal insulin allows for greater control.

To this day I am still on the insulin pump, however I have had some short breaks. It hasn't been plain sailing. It takes a lot of work and even then things can look like they are heading in the wrong direction. The key is to find out what works for you, everyone is different. For me, finding an infusion set that works for me has been pivotal in remaining with the pump. I still go through spells of having difficulty with infusion sets not working. Even though I rotate places to put the infusion set, there obviously is a limited number of places one can use.

I have had several pumps since October 2006 and during March 2009 I signed up for a pump trial. This particular pump wasn't on the market for general use, effectively I was testing it amongst a group of people to see if it worked as expected before being released. I found this an exciting time and in fact the pump was released and I am still using the same model of pump now (Accu-Chek Spirit Combo, shown below). 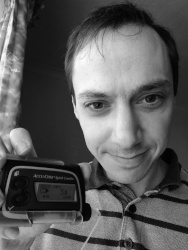 I have been involved with another trial project in 2009 which allowed nurses to view the pump data and glucose readings via uploading from the pump and blood test meter using a computer at home. The nurses were then able to see the readings and advise accordingly via a messaging feature. This was very exciting for me. At the time, I believe this was really unheard of and new.

March 2017 - Continuous Monitoring Systems (CGMs) - Here is where I started to discover for the first time CGMs. For those of you who don't know, there are quite a number of systems out there now that continuously monitor blood sugar levels, well not exactly blood sugar levels but something that closely corresponds with blood sugar levels. This is the interstitial fluid, which is a thin layer of fluid that surrounds the cells of the tissues below your skin, not from your blood.

March 2017 - Abbott's FreeStyle Libre System - I was offered a trial to try one sensor on the Libre system and of course I loved it. The user uses a reader and places it near the sensor, the system then transmits the reading wirelessly via NFC to the reader. This is technically a flash glucose monitoring system but effectively it is a CGM without alarms. As long as the user scans every 8 hours then you get a full profile of what is going on with the blood sugar levels. I actually learnt a number of diabetes related issues just from the trial, I learnt that sometimes I would be going hypo during the night without my knowledge, also when the blood sugar levels were rapidly changing then I get a slight hissing noise in my ear! The system was still quite new at this point in time and looking back I believe that Abbott have made improvements to the sensors. I self funded this from this point to September 2019.

July 2017 - I self funded the Dexcom G5 for a month, I first became aware of this system from seeing someone on YouTube with it. I was particularly interested in the ability to raise alarms should there be issues. Of course I thought wow, but unfortunately this system is very expensive. The Dexcom G5 worked very well, I had to calibrate it by doing actual blood test readings but generally I was very happy with it. Unfortunately I found out that this system wasn't for me for various reasons, including expense and the location of where the sensor can officially be placed. If anyone is in a position to use this system then definitely worth looking into, I have heard good reports about the Dexcom G6.

August 2019 - MiaoMiao version 1 - I ordered the MiaoMiao which is a device you can stick onto the Libre sensor and on your arm to allow the readings to be continuously sent to a smartphone or smart watch. This allows for alerts to low or high blood sugar levels and depending on the software you use, it can predict lows in real-time. The readings are sent every 5 minutes to your chosen device. So far this system has worked fine apart from on one sensor where it didn't read the data correctly from the sensor. I have no idea why this happened but after waiting another 14 days to change the sensor, it is now working fine. This device is not distributed from the UK, so order at your own risk but the actual ordering process was easy. This device isn't supported by Abbott and there is some working out to do, in terms of getting to work properly, there is documentation out there to help with this. 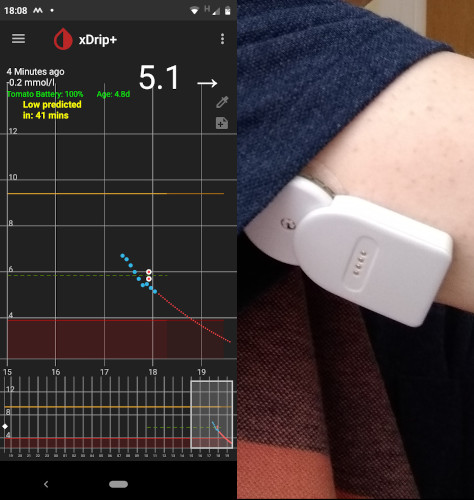 September 2019 - Abbott's FreeStyle Libre - I am pleased to report that this is now on prescription after meeting the requirements for this.